As pro golfer Tiger Woods was arrested on a DUI charge early Monday morning, the sports world marveled at how far the superstar has fallen.

The former great was busted Monday around 3 a.m. in Jupiter, Florida, and released later on his own recognizance. Woods is now 41, and has fallen completely off the map in the golfing world. His career has been marred by injuries, a sex scandal, and poor play.

Now, there are many in the sports world that are beginning to offer some life advice.

Pro golfer John Daly feels like Tiger might have some vices he needs to deal with. “That dude is crazy, man. I like ole Tiger man, but that dude might have a problem. He chases all the women, drinks all the beer, he’s a fun guy to hang out with, but I just have take a break sometimes, man.” Daly stated. “Don’t get me wrong. I like to party. I’m on my way to a party right now and it’s 9 a.m. There’s gonna be a donkey, and a stripper on a trapeze, but I can’t keep up with Tiger. That dude might need some reflection, man. I hope he’s out in time to come to the party. Maybe I can be a mentor to that dude.”

This week on the Daly Dose we are looking forward to the holiday weekend! With Memorial Day being a time for remembrance we recall a few things that we miss in the world of sports. From the big hits in football, to the days before instant replay, to real sports news there are a number of things that have us feeling nostalgic.

Who is the best team in Major League Baseball right now? It isn’t the Chicago Cubs, that’s for sure.

We have some fake news coming out of the NFL that is being spun as a controversy.

Remember when the Big 12 Conference was going to take the world of college football by storm? That seems a like really long time ago.

A brief look at the NBA Lottery and incoming draft class, and those NBA playoffs have not been easy to watch.

Finally, with the LA Coliseum now being sponsored by United Airlines, we have the Top 5 slogans for the new LA United Coliseum!

Listen here to Episode #130 Memorial day and the things we miss!

The 2017 NBA Draft will be taking place on June 22nd in Brooklyn, NY at the Barclays Center. UCLA point guard Lonzo Ball is projected to be a Top 5 pick, but he is already gearing up to avoid an embarrassing incident.

When Ball attends the big event next month he has stated that he will ask his father LaVar to drop him off at the curb outside the Barclays Center.

“My dad is always embarrassing me.” said Lonzo. “First he said I would be better than Steph Curry, LeBron James, and Russell Westbrook, then he said he could beat Michael Jordan and Charles Barkley in one-on-one. I’m just sick of him.”

The elder Ball has been extremely vocal throughout Lonzo’s collegiate career and the draft process. Back in April, he criticized the UCLA coaching staff when they lost to Kentucky in the NCAA Tournament. “Realistically you can’t win no championship with three white guys because the foot speed is too slow. I told Lonzo—’One of these games you might need to go for 30 or 40 points.’ It turned out that was the one game. Then once they get to the Elite Eight, they’re right there.”

Is Lonzo worried about the repercussions he might face for ditching his father at the draft?

“What’s he going to to? Start a shoe company selling cheap Kobe wanna-be’s for $500 dollars a pop?” Ball asked.

“Been there, done that.”

This week on the Daly Dose, we make our picks for who will be going to the NBA Finals! With the NBA Conference Finals now underway, we tell you who is going to win the East between the Boston Celtics and the Cleveland Cavaliers, and who will win the West between the Golden State Warriors and the San Antonio Spurs.

What happened to Houston Rockets guard James Harden in the series against the Spurs? We think we may know why he failed to show up for Game 6.

Colin Kaepernick can’t seem to get many looks in the NFL, the Denver Broncos made some fans angry, Tom Brady is tempting fate, and do Big Baller brand shoes actually make you a big baller?

And with the Warriors and the Cavs being heavy favorites to go to the NBA Finals, we count down the Top 5 upsets that have taken place in the NBA Conference Finals.

Listen here to Daly Dose #129 Who is going to the NBA Finals?

Just months after winning his fifth Super Bowl ring, it seems that the career and possibly life of New England Patriots quarterback Tom Brady may be coming to an end. 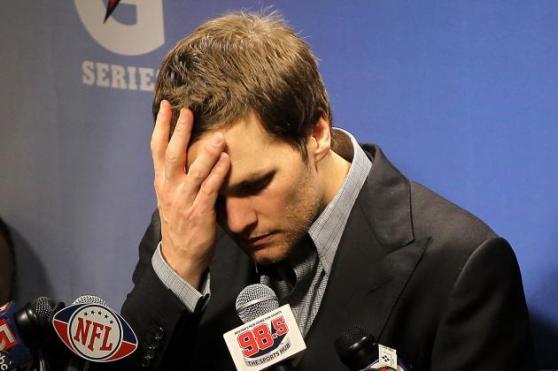 Upon hearing the news Brady immediately contacted a lawyer, and began putting his affairs in order.

“It has been a fun ride.” stated Brady through tears.  “I have enjoyed not only my time in the NFL, but also my time on earth. Unfortunately, it seems that all good things must come to an end. I will be leaving all of my worldly goods to my children. I will leave my starting position on the Patriots with Jimmy G. I have to give a few bucks to my boys John Jastremski and James McNally. Those guys are true friends. Thank you to Robert Kraft, Bill Belichick, all of Patriot Nation…oh, and one more thing…SUCK IT, GOODELL!”

The NFL Draft put a few players around the league on notice that their days could be numbered. Who should be looking over their shoulder?

We are nearly finished with the NBA conference semifinals, and of course we are seeing some players getting it done in the biggest moments, and a few players that are failing to make the big plays.

University of Alabama head football coach Nick Saban just got a big raise, so of course that means we have to hear about how that money should go to the players. Unfortunately, it isn’t that easy.

Finally, with the Gennady Golovkin vs Canelo Alvarez fight finally being announced, we look back at the Top 5 greatest fights that never did take place.

With the release of his new brand Big Baller line of shoes, LaVar Ball has had to justify the premium prices of the items listed on his website.

Many in the sports world have questioned the price of the the main shoe, the ZO2, which is currently retailing for $495. The shoes will not even ship until November, and many critics are bashing everything about the new line, from the originality of the logo to the design of the shoe itself. Ball has refused to disclose any sales numbers, or even who is making the shoe. There are also a pair of sandals that are available to order for $220. All profits from the sales go directly to the Ball family.

In response to many of the critics, Ball released the following statement on Twitter:

Big Baller’s loose! If you can’t afford the ZO2’S, you’re NOT a BIG BALLER! 💰

He also spoke to the initial backlash stating that “Prada and Gucci is selling theirs for what they want,” Ball said. “Ours is better than that. It feels better.”

However, Ball has to be concerned by the fact that he was turned down by the major shoe companies — Nike, Adidas, and Under Armour. if sales do not take off, he will have lost a substantial amount of money.

“I’ve always been a big baller, but I am really hoping that people buy these shoes, or I lost a few million bucks.” Ball stated. “If this fails, I might be less of a big baller, which would be sad. I would have to wonder if I should have spent my money in a more lucrative way. Like perhaps shooting lessons for my son Lonzo.”

This week on the Daly Dose, we take a look at the wild weekend that was the 2017 NFL Draft! Who were the winners and losers as NFL teams selected the top collegiate talent? NFL writer Dillon Brooks stops by to discuss which teams got better, and who may have fallen short!

The NBA conference semifinals are under way, and Clint and Dillon give you their picks in each series, and a few things that have stood out so far.

Anthony Joshua unified the heavyweight title in London last week, and he just might breathe some life into the world of boxing.

Plus Stanley Cup Playoffs, how the ESPN layoffs might affect you, and we count down the Top 5 horses that are least likely to win the Kentucky Derby!

Amid all of the recent layoffs and reports, that the global sports television channel is losing millions of subscribers, ESPN made a surprising announcement.

They will be awarding themselves the Arthur Ashe Courage Award for bravery, this summer, at their annual ESPY awards show. A spokesperson for the media giant stated that the award for courage is only fitting.

“What the executives here at this fine company have done is to be commended. Yes, things have been a difficult, and a number of very talented people have lost their jobs. Unfortunately, that was a sacrifice that had to be made, but ESPN will press on and move forward. We are not going to give up the fight.” stated the source.

ESPN has been hemorrhaging subscribers over the past six years, as many sports fans are changing the way they view their favorite sporting events. The problem for the network, is that they have already signed long-term deals for broadcasting rights to major sporting events, and their choices in programming are not keeping viewers satisfied.

Will any of the ESPN executives that made these ill-conceived financial deals be losing their jobs?

“No, that won’t be happen.” said the spokesperson. “But we will consider accepting this prestigious award on behalf of some of our fallen comrades.  Hopefully, that makes them feel better. Look, we deserve this. We are persevering. We feel like we are the Caitlyn Jenner of the sports media world.”