This week on the Daly Dose Sports Podcast Clint breaks down the 2016 NFL Draft, talks about how to improve the first round of the NBA Playoffs, tells a Prince story or two, and counts down the Top 5 worst QBs taken with the No. 1 overall pick. Check out Episode 74!

The Rams were looking for a splashy move to get them out of the funk they’ve been in. Over the past four seasons they have finished 7-9, 6-10, 7-9, and 7-8-1. So they moved to LA and traded up to draft a shiny new QB. Goff should be able to help the Rams reach 8-8 in just a few seasons.

The Eagles traded away four draft picks to move into the No. 2 spot, and draft a new quarterback, which reportedly infuriated current quarterback Sam Bradford. He has now thrown a temper tantrum and asked to be traded. And probably hurt himself again in the process.

The Chargers need some help on the defensive side of the ball and Bosa should help right away. This might not make QB Philip Rivers happy, after being sacked 40 times in 2015, but at least Bosa won’t be sacking him.

Ramsey played both cornerback and safety at FSU and will need to become more polished to be worth this high of a pick. But he was very impressive at the NFL Combine, and we all know that Jerry Jones likes shiny things, no matter if they make sense or not.

The Jags are quietly building a solid team which is nice, because when they end up moving to London the Brits are going to get a decent team to watch, while they sip their tea.

Baltimore was one of the most injured teams in 2015. They lost OLB Terrell Suggs to a torn Achilles. Chris Canty was out with a torn pectoral muscle. RB Justin Forsett broke his arm. And QB Joe Flacco severely sprained his unibrow.

The Niners were really hoping to get Goff, but just as Colin Kaepernick is learning, you don’t always get what you want.

The Browns got a great deal by trading the No. 2 pick to the Eagles, and picking up four picks in return. Of course, it is the Browns. So these picks are pretty much guaranteed to do nothing. Except illegal substances.

Tampa needs help literally everywhere on the defensive side of the ball after allowing nearly 27 points per game in 2015. Hargreaves gives them a talented young corner. Now they just need ten other guys.

Peyton’s little brother needs a better offensive line. And the Giants are going to have some adjustments to make after the firing of head coach Tom Couglin. Like how dinner will no longer be served at 3:00 p.m.

John Fox is starting to put together a team that is capable of making the playoffs. Of course, it is John Fox, so they will lose once they get there.

The Saints have to get better defensively. Because it is scientifically impossible for them to be any worse.

The Dolphins will get better on the defensive front, and they will hope that no one notices that quarterback Ryan Tannehill is not nearly as good as his wife looks.

If the Raiders can shore up their secondary they could have an outside shot of making the playoffs for the first time since 2002. No really. I’m serious. Stop laughing.

The Titans trade down and try to get some more personality for what is easily the most boring team in the NFL. So they draft an offensive lineman out of Michigan State. Let the ticker-tape parade begin.

The Lions must look to beef up their defensive line. And they also need to get off to a better start than they did in 2015, when they lost their first five games of the season.  Of course the Lions went 0-16 in 2008, so five games were a picnic to Detroit fans.

The Colts are saying that they will take the top player in the draft regardless of position, but if they can’t protect Andrew Luck than this team is still going to be uglier than Luck’s beard.

The Jets could probably use an offensive lineman here, but let’s be honest who are they going to be protecting? Geno Smith? So nevermind.

Washington fans are looking forward to another playoff run after scraping their way into the postseason last year. Fortunately, people in the D.C. area are used to unfulfilled expectations.

The Texans grab a talented wide receiver for new quarterback Brock Osweiler who signed via free agency. Osweiler is sure to become yet another great QB in Texans history…just like David Carr and Matt Schaub.

The Vikings pick up a deep threat wide receiver here, but only because drafting a kicker in the first round would seem ridiculous.

The Bengals will draft Will Fuller from Notre Dame and look to immediately corrupt him into their twisted cult of evil and stupid penalties.

Early last season the Steelers defense looked like it was going to be fine after the losing defensive coordinator Dick LeBeau. But then they found out that they couldn’t play the Browns every week.

The Seahawks need to replace the loss of Brandon Mebane and Chris Jones is used to playing in a stadium full of clanging cowbells at Mississippi State. So playing in another stadium of manufactured noise should be a good fit.

BJ Raji is taking the year off and Mike Pennel is suspended for the first four games, so the Packers look to pick up another 300 pounder. At least until Eddie Lacy gets back to eating cheese curds 12 times a day.

With the Justin Houston injury the Chiefs are forced to grab another pass rusher, but unless he can take over the clock management duties from Andy Reid late in games, then does it really matter?

The Patriots forfeit this pick due to “deflate-gate”. And now Tom Brady is suspended too. Just wanted to remind Patriot fans in case they forgot.

The Cards pick up a safety here and then Carson Palmer will also throw the ball to a safety in the Cardinals playoff game. And a cornerback. And a linebacker.

It isn’t that the Panthers really need another tackle, but Cam Newton is still seeing Von Miller in his nightmares. And it’s starting to interfere with his daily dab routine.

Robert Nkemdiche is a talented player, but he did have a pretty serious off the field incident, while under the influence of marijuana. So he needs to go to a place where his access to pot is limited.

On Episode 73 of the Daly Dose Sports Podcast we take a look at the NBA Playoffs so far, and a give our predictions for the first round. Plus a look at the 2016 NFL schedule, and some of the top games that are coming. And in honor of 4-20 we count down the Top 5 stoner athletes of all time!

But according to Red Sox manager John Farrell there is just too much residual swelling to get a good evaluation.

Sandoval received a cortisone shot and will be looked at again in two weeks.

But according to his left shoulder it isn’t the only problem.

“Look man, I’m not saying that I’m not sore but let me ask you something…how would you feel if you had this dude laying on you every night?” asked Sandoval’s left shoulder on Tuesday. 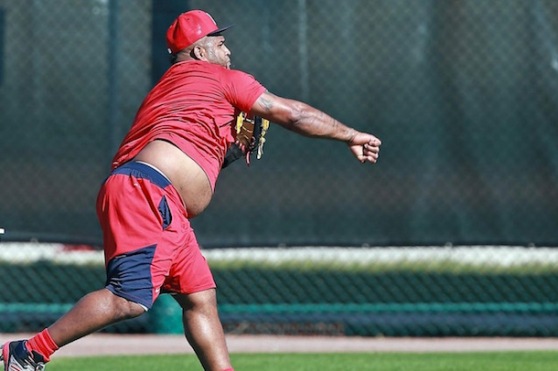 “They got this cat listed at 255 pounds…let me tell you…I’ve seen the scale, and it spins three times before it even slows down.” it continued.

Sandoval signed a five-year deal worth $95 million dollars prior to last season but then had the worst season of his career. He hit just .245 with only 10 homers and the club began wondering if some of his problems went back to his extra weight.

The Red Sox have placed Sandoval on the disabled list with a “left shoulder strain” last week, but they aren’t exactly sure when the injury took place.

“Strain? They listed me as strained?” asked the shoulder. “This guy fell asleep on me after knocking out 14 Big Macs! So yeah, I’m strained. Strained like the Coyote was strained when a piano fell on him in the Roadrunner cartoons. Ohhhh….mannn…is that cortisone? Oh I love cortisone. We should go to McDonalds again.”

This week on Episode 72 of the Daly Dose Sports Podcast, we hand out some college basketball season-end awards! We also take a look at five overrated players in the upcoming NFL Draft, and talk some NBA playoff scenarios. Plus we count down the Top 5 Least Outstanding Players of the NCAA Tournament in history!

On Saturday, Johnny Manziel stated that he was living with Denver Broncos linebacker Von Miller. 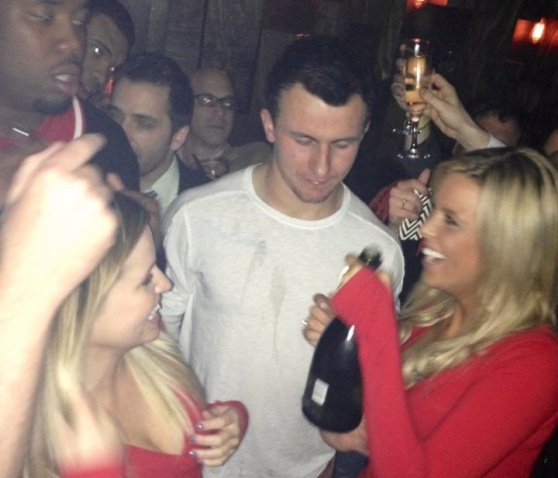 On Monday afternoon, Miller tweeted out that Manziel is his “brother”, but is not actually staying with him.

It turns out that Manziel is instead living with suspended Cleveland Browns wide receiver Josh Gordon.

Also on Monday, it was announced that Gordon has failed yet another drug test, after testing positive for a drug dilute that is used to mask drug usage.

The duo is apparently living in Hollywood off of Sunset Boulevard.

“I don’t think there’s anything wrong with partying, bro,” Manziel explained. “There’s a difference between partying and being out of control. And also, have you ever noticed that 4:20 pm comes at the same time every day?”

The Daly Dose has been informed that the Manziel/Gordon home is furnished with pillows full of heroin and beanbags full of crack rocks.

We were also able to track down Gordon, who was found sitting at a stop sign in his camouflage-colored Porsche, waiting for for the sign to turn green.

When asked if he was in any condition to be driving he shouted “Are you a cocaine?!?!”

This week on the Daly Dose Sports Podcast, Clint breaks down a wild finish in the NCAA Championship game. Talking NBA playoff match-ups, Major League Baseball, and some NFL news, plus the Top 5 NCAA Championship shots of all time! Check out Episode 71!

Scientists at the University of Denver have confirmed that sports teams who celebrate by “dabbing” tend to lose the biggest games.

Dabbing is a dance in which the dancer simultaneously drops the head while raising an arm and the elbow. 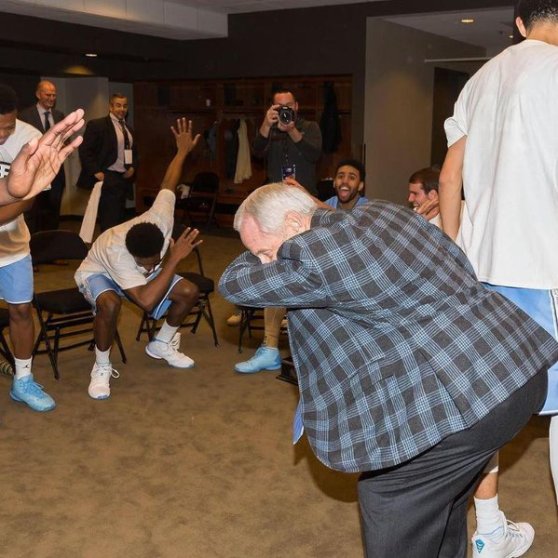 But according to DU scientist Lawrence Paul, it has proven to guarantee a loss for the team who participates in the now tired trend.

“We tested teams from across the country. We watched a ton of film. Many of them would make a big play and then they would dab. Those teams invariably would lose the most important games.” Paul said.

Could there be any other explanations for the failures in big games?

Paul responded. “Well it does help to be from the state of North Carolina. That state seems to be a sports factory of sadness, but we have seen other failures that come from different states. Ohio immediately comes to mind.”

“This isn’t a coincidence. These teams keep doing this hideous celebration and it is rubbing off on the youth of America, inspiring a new generation of losers. This is like Tebowing but somehow less cool.” 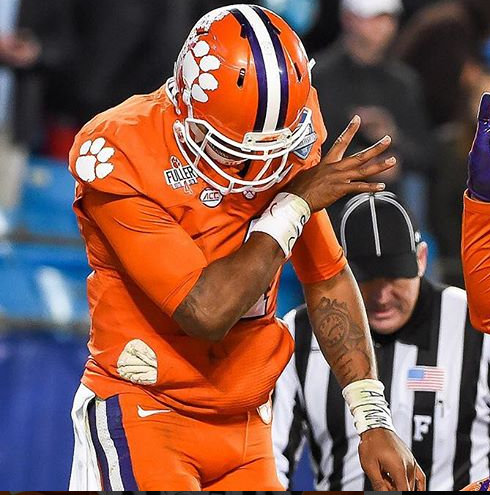